The Case against Fluoride

When the U.S. Public Health Service endorsed water fluoridation in 1950, there was little evidence of its safety. Now, six decades later and after most countries have rejected the practice, more than 70 percent of Americans, as well as 200 million people worldwide, are drinking fluoridated water. The Center for Disease Control and the American Dental Association continue to promote it–and even mandatory statewide water fluoridation–despite increasing evidence that it is not only unnecessary, but potentially hazardous to human health.

In this timely and important book, Dr. Paul Connett, Dr. James Beck, and Dr. H. Spedding Micklem take a new look at the science behind water fluoridation and argue that just because the dental and medical establishments endorse a public health measure doesn’t mean it’s safe. In the case of water fluoridation, the chemicals that go into the drinking water that more than 180 million people drink each day are not even pharmaceutical grade, but rather a hazardous waste product of the phosphate fertilizer industry. It is illegal to dump this waste into the sea or local surface water, and yet it is allowed in our drinking water. To make matters worse, this program receives no oversight from the Food and Drug Administration, and the Environmental Protection Agency takes no responsibility for the practice. And from an ethical standpoint, say the authors, water fluoridation is a bad medical practice: individuals are being forced to take medication without their informed consent, there is no control over the dose, and no monitoring of possible side effects.

At once painstakingly documented and also highly readable, The Case Against Fluoride brings new research to light, including links between fluoride and harm to the brain, bones, and endocrine system, and argues that the evidence that fluoridation reduces tooth decay is surprisingly weak.

“The insanity of intentional water fluoridation is examined from every angle in this book. International law forbids dumping fluoride waste into the sea but it is accepted in American drinking water. As stated in the toothpaste disclaimer above, the FDA officially considers fluoride to be a drug. This drug has never been approved by the FDA. Contaminating drinking water with fluoride can be most charitably characterized as an experiment which violates the Nuremburg Code prohibiting experimental human treatment without informed consent. China, India, Japan and most of Europe do not fluoridate their water. Toward the end of the book the authors pull out one of my all-time favorite quotes from the late Michael Crichton. ‘Historically, the claim of consensus has been the first refuge of scoundrels; it is a way to avoid debate by claiming that the matter is already settled … The greatest scientists in history are great precisely because they broke with the consensus . . . There is no such thing as consensus science. If it’s consensus, it isn’t science. If it’s science, it isn’t consensus. Period.’ THUMBS UP.”

Water fluoridation is a major controversy pitting prevention (dental caries) against ethics (involuntary drug exposure). Connett (emer., St. Lawrence Univ.), Beck (emer., Univ. of Calgary), and Micklem (emer., Univ. of Edinburgh) present compelling but not always convincing arguments for discontinuing fluoridation. They emphasize systemic treatment's low efficacy, alternative preventive approaches, the public's involuntary exposure, and potential toxicity. Although not uniquely American, water fluoridation is more popular in the US than in most countries. If ingestion of fluoride were very effective in preventing caries, the authors would still argue against the practice on ethical grounds. Six parts cover ethical arguments, lack of evidence of efficacy, the policy gamble, toxicity, the precautionary principle, and vested interests. Some inconsistencies are evident. The book emphasizes uncertainties in epidemiologic studies of efficacy, but deemphasizes uncertainties in toxicity reports, creating an imbalance appropriate for a polemic but not for a scientific treatise. Fluoridation advocates will interpret this as evidence that the antifluoridation point of view is exaggerated, whereas sympathetic readers will find their resolve strengthened. Alternatives such as fluoride supplements exist, but would not reach the poor populations that need them. This is a thought-provoking work for students of environmental policy and public health. Summing Up: Recommended. Lower-level undergraduates through graduate students; general readers.

"On the eve of the new millennium, the Centers for Disease Control (CDC), listed water fluoridation as one of the twentieth-century’s 10 greatest public-health achievements. Yet according to the authors of this painstakingly researched exposé of fluoridation’s overall ineffectiveness and toxicity, endorsements such as these from the CDC and other health organizations are motivated more by face-saving politics than credible research. Fluoridation advocates who have previously branded detractors as conspiracy theorists and shills for “junk science” will be hard pressed to debunk the hundreds of peer-reviewed studies and sound scientific reasoning presented here. In demonstrating fluoridation’s ineffectiveness, the authors cite exhaustive evidence proving fluoride’s only benefits are topical, as in toothbrushing, as opposed to swallowing. But the case against fluoride’s alleged safety, even in small doses, is more alarming, with multiple studies showing fluoride’s probable complicity in lowered intelligence scores, thyroid dysfunction, hip fractures, and the ominously rising incidence of osteosarcoma in boys. The authors’ academic, hyperbole-free writing style serves them well in marshaling a series of facts that, all by themselves, expose fluoridation as a false panacea. It remains to be seen, however, whether the public-health community will give this landmark work due credit or continue to rubber stamp an outdated policy that, like bloodletting and trepanation, properly belongs on the scrap heap of sham medical interventions."

“At once painstakingly-documented and also highly-readable, The Case Against Fluoride brings new research to light, including links between fluoride and harm to the brain, bones, and kidneys, and argues that while there is possible value in topical applications like brushing your teeth with fluoride toothpaste, the evidence that swallowing fluoride reduces tooth decay is surprisingly weak. The Case Against Fluoride doesn't question the good intentions of dentists who support fluoridation, but rather explores the poor science, bizarre tactics, biased reviews, and puzzling motivations of a relatively small number of influential people who continue to push this practice on a largely ill-informed public.”

"Sweden rejected fluoridation in the 1970s and, in this excellent book, these three scientists have confirmed the wisdom of that decision. Our children have not suffered greater tooth decay, as World Health Organization figures attest, and in turn our citizens have not borne the other hazards fluoride may cause. In any case, since fluoride is readily available in toothpaste, you don't have to force it on people."--Arvid Carlsson, Nobel Laureate in Medicine or Physiology (2000) and Emeritus Professor of Pharmacology, University of Gothenburg

"Alfred North Whitehead said the scientific method means leaving 'options open for revision.' An ancient Roman adage says that 'whatever touches all must be approved by all.' These characterizations of science and democracy are the reasons for reading this book. Especially if you and your family are drinking administratively mandated fluoridated water."--Ralph Nader

"This book clearly shows that water fluoridation is poor public policy and must end. As a concerned citizen, I applaud the authors for bringing this issue to the world's attention."--Ed Asner

"For anyone who has ever wondered why cities add fluoride to water-and questioned whether they should. Written with clear and easy-to-read prose, and supporting citations, The Case Against Fluoride carefully lays out the arguments against fluoridation and reasons why it should be discontinued. The authors examine the evidence on fluoridation and conclude convincingly that it should now be considered 'harmful and ineffective.'"--Dr. Hardy Limeback, Professor and Head of Preventative Dentistry, University of Toronto 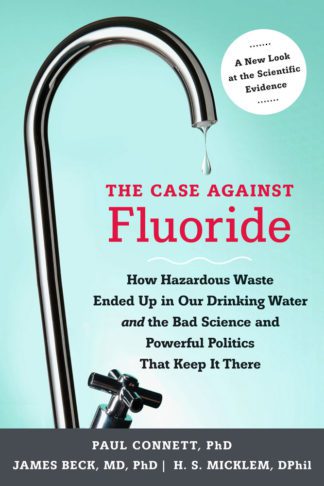 You're viewing: The Case against Fluoride £22.50
Buy Now
We use cookies on our website to give you the most relevant experience by remembering your preferences and repeat visits. By clicking “Accept”, you consent to the use of ALL the cookies.
Cookie settingsACCEPT
Manage consent