How One Small Town Banned Pesticides, Preserved Its Food Heritage, and Inspired a Movement

Mals, Italy, has long been known as the breadbasket of the Tyrol. But recently the tiny town became known for something else entirely. A Precautionary Tale tells us why, introducing readers to an unlikely group of activists and a forward-thinking mayor who came together to ban pesticides in Mals by a referendum vote—making it the first place on Earth to accomplish such a feat, and a model for other towns and regions to follow.

For hundreds of years, the people of Mals had cherished their traditional foodways and kept their local agriculture organic. Their town had become a mecca for tourists drawn by the alpine landscape, the rural and historic character of the villages, and the fine breads, wines, cheeses, herbs, vegetables, and the other traditional foods they produced. Yet Mals is located high up in the eastern Alps, and the valley below was being steadily overtaken by big apple producers, heavily dependent on pesticides. As Big Apple crept further and further up the region’s mountainsides, their toxic spray drifted with the valley’s ever-present winds and began to fall on the farms and fields of Mals—threatening their organic certifications, as well as their health and that of their livestock.

The advancing threats gradually motivated a diverse cast of characters to take action—each in their own unique way, and then in concert in an iconic display of direct democracy in action. As Ackerman-Leist recounts their uprising, we meet an organic dairy farmer who decides to speak up when his hay is poisoned by drift; a pediatrician who engaged other medical professionals to protect the soil, water, and air that the health of her patients depends upon; a hairdresser whose salon conversations mobilized the town’s women in an extraordinarily conceived campaign; and others who together orchestrated one of the rare revolutionary successes of our time and inspired a movement now snaking its way through Europe and the United States.

A foreword by Vandana Shiva calls upon others to follow in Mals’s footsteps.

"Northern Italy’s South Tyrol province is at a cultural crossroads where the Swiss, Austrians, and Italians have all claimed the region’s fertile slopes. The latest struggle for the area is agricultural, pitting organic farmers against Big Apple, the opposition’s nickname for a cooperative of fruit growers who spray pesticides on their high-tech orchards up to 20 times per year. Due to frequent winds, Big Apple’s pesticides drift into the adjacent organic fields, harming the income and reputation of farmers who pledged to be chemical-free. Thanks to its remoteness, Mals, a municipality in South Tyrol, has been out of Big Apple’s reach, but the construction of industrial orchards is approaching. This is the story of Mals and its successful, preemptive campaign to ban pesticides within the township borders. With profiles of organic farmers, descriptions of traditional foods, and accounts of creative local politics, the book will appeal to readers who enjoy reading encouraging stories of grassroots environmental action. A short 'activist’s primer' is included."

"In this down-to-earth volume on the effects of pesticides, Ackerman-Leist (Rebuilding the Foodshed), a farmer and professor at Green Mountain College, chronicles the agricultural battles waged in Mals, a town in the Italian Alps filling fast with apple orchards. Residents had grown accustomed to the 'gradual march of the orchards up the slopes' but were dismayed by the 'enveloping mists blasted from the spray machines mounted on the back of the advancing tractors.' Ackerman-Leist profiles some of the crucial actors in Mals’s fight against 'Big Apple,' during which the residents of Mals passed a referendum vote to ban pesticides. He introduces Günther Wallnöfer, an organic dairy farmer whose family business sat adjacent to a new orchard; residue from the orchard’s chemical sprays had found its way to Wallnöfer’s livestock. Ackerman-Leist also talks with Peter Gasser, a veterinarian who interacted daily with farmers and livestock. As a result of this work Gasser had a thorough knowledge of the community’s issues, which he would later use to help lead the fight against pesticides in the town. Ackerman-Leist argues that Mals’s story has particular relevance for American farmers who face similar circumstances, and he concludes his discussion with useful suggestions for farming communities on topics such as information gathering and political engagement.”

"Focusing on a region of the Alps where farming has been a mainstay for millennia, this book examines a successful grassroots movement to ban pesticides…. A Precautionary Tale is an optimistic read with an enthusiastic and celebratory tone. Activists will find it inspiring, and community leaders in a position to take the example of Mals may see in it a blueprint for peaceful, calm, and productive civil discussion around the environment."

“An inspiring tale of citizen science and community action.”—Raj Patel, author of Stuffed and Starved: The Hidden Battle for the World Food System

“Ackerman-Leist tells the story of how a small town took on the powerful forces of chemical agriculture and not only won, but created a template that anyone seeking a poison-free environment anywhere in the world can follow.”—Barry Estabrook, author of Tomatoland and Pig Tales

“Climate change, xenophobia, war, hunger, madmen and autocrats running the world. It’s easy to feel paralyzed when faced with the enormity of our modern dilemma. Philip Ackerman-Leist’s A Precautionary Tale gives us hope, and provides us with a real-life tale of regular folk who stood up to the Goliath that was about to swallow their community, and succeeded. This book is living proof that even against overwhelming odds we have enormous power in and around the places where we live.”—Michael Ableman, farmer and; author of Street Farm: Growing Food, Jobs, and Hope on the Urban Frontier

“A Precautionary Tale is the hopeful message we all need! Philip Ackerman-Leist shows us that we still have the power, as citizens, to gather and change the reality of our daily lives. The people from Mals could be you and me. They have proven that working for empowerment is not in vain. Indeed, they have managed to defeat giant corporations. And they remind us that we can’t let despair or sadness paralyze us, that we can trust the strength of community, and that we must do our part and act.”—Perrine and Charles Hervé-Gruyer, authors of Miraculous Abundance

“Many, many thanks to Philip Ackerman-Leist for telling us the wonderful story of Mals, the town in Italy that decided to ban the use of pesticides! This story is extremely inspiring for us all. It shows that there is a way out of the actual dependency of our agriculture on pesticides, and that a group of informed and active citizens, together with brave local politicians, can change the world for the better. May this excellent book inspire communities all around the world—and our politicians, too!”—François Veillerette, chair, Pesticide Action Network Europe 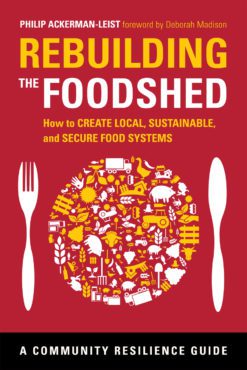